Here's my new (to me) Moto Guzzi 850-T. 1975. Pre-oil filter. Paid too much for it, but it seems in good shape. So far I've installed a new battery, new tires, changed the fluids, cleaned out the carbs (and put bigger mains in), checked the valves, put on a new exhaust and installed several relays to get the lights brighter and horn louder. Guzzi routed all the power so it was going through the various switches (which were old) and this was causing power drops. Same for the ignition - all the power ran through the ign. key cylinder. Stupid. Plus mine was flaky so sometimes it'd just cut out the power. Now I've got a new cylinder + it's just used to signal a relay to open the gates. Mo' power! I also put a new master cylinder on there - the original felt like there was a pound of grit in there, and the brakes felt like wood (possibly an effect of the prev. owner putting a second disk on it?). Oh, and I added a kill switch. Previous owner removed the kill switch? Huh. 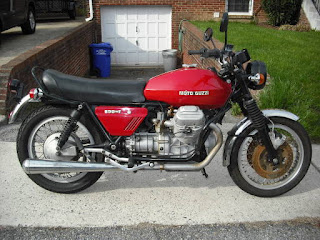 Occupying the 4th position in the Chinese Zodiac, the Rabbit symbolizes such character traits as creativity, compassion, and sensitivity. Rabbits are friendly, outgoing and prefer the company of others. Rabbits believe strongly in friends and family and lacking such bonds can lead to emotional issues.

Classy, sophisticated, expressive, well-mannered and stylish, those born under the Sign of the Rabbit enjoy leaning about cultural issues and learning about people from other countries.

Wood Rabbits occupy their time doing for others; always feeling the need to make others content. This generosity is easy for others to take advantage of and sometimes Water Rabbits don’t even realize is happening.

Posted by pushrodmofo at 1:39 PM No comments:

A motorcycle is not an appliance.

"A motorcycle is not an appliance. No one hugs their refrigerator" -Big Sid from Big Sid's Vincati.

I'm currently reading this - Matthew Biberman sets out to help his dad, legendary Vincent tuner "Big Sid", build the special of their dreams: a Vincati - a Black Shadow engine in a Ducati frame, after Sid suffers a heart attack. Good stuff.

Originally a Hi-Rider (the horror) that had literally been pulled from a chicken coop, I'd swapped the tank, panels, bars, etc. from my Combat Commando. It had a bad valve guide so it smoked liked crazy. Occasionally I'd find bird seed wedged in places. Eventually I returned it to Hi-Rider trim and sold it. 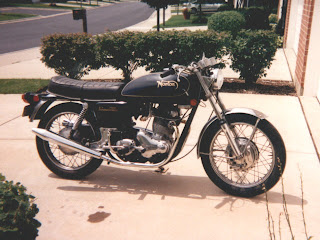 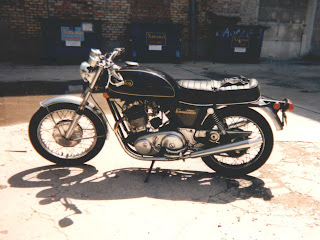 Posted by pushrodmofo at 2:11 PM No comments:

So about 10 or 12 years ago, I went down to Tumin's (Alcohol Abuse Center) to meet up with some lady friends. I believe I rode the Commando. After I walk in there's some drunk who yells something about guys riding vintage bikes or something. All in good fun. Or so I thought.
He makes a couple of more comments about leaky this or whatever, and it becomes apparent that he's not just joking around with a fellow rider. This is made all the clearer by his embarrassed girlfriend who is simultaneously apologizing to us, and trying to hustle him out of the bar.
Then the magical phrase rings out; he calls me a "pushrod motherfucker". We were dumbfounded - this guy was seriously pissed off about people riding motorbikes with pushrod engines. To further display his disdain he hops on his 80's POS and does a masculine wheelie down the street (it was actually a pretty good one). He sure showed me.
And a legend was born...
Posted by pushrodmofo at 9:14 AM No comments:

And what is a pushrod mofo?

It's complicated. Not really.