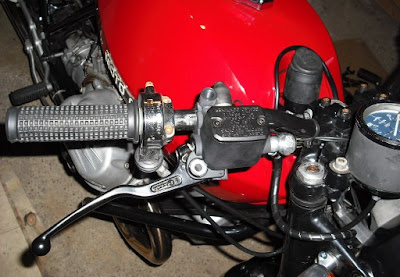 Got a brand new Brembo Master Cylinder from MG Cycle. The original one felt like there were giant pieces of gravel in there, and the brakes felt wooden. I believe the lack of feeling was because the stock T master cyl. is for a single disk, not 2. The crunchy stuff was probably from this thing sitting for a million years and the brake fluid drying out.
I had put a GSXR master cyl. on there, but really had no way to mount the reservoir (other than zip ties), without finding a generic bar clamp / bracket. The other problem was that I had "borrowed" it and the original owner at some point will want it back.
What's nice about this one is the reservoir is not detached, but cast into the housing so it's smaller than the Tokiko one. The other great part is it actuates the brake like waaaay better than the original Guzzi pressure sensor. Before I had to really pull on the lever to make the brake light came on, so I had to make sure and use the rear all the time to guarantee it lit up. I don't use the rear a lot, especially under light braking, so it was kinda annoying.
I have to admit to spending a few minutes player Homer Simpson: light comes on! light goes off! light comes on! light goes off!
Last week I had also remounted the front fender after redrilling the bracket holes. Now the front edge sticks out a little more. Looks pretty good with the Tarozzi fork brace. I must admit to liking the "no fender" look, but that also means more junk / water / whatever being flung from the tire hitting the front engine / me. 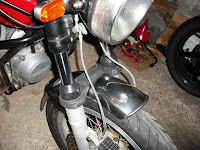 Posted by pushrodmofo at 1:05 PM