So begin the modifications.

I'm going to try and lighten up the looks of the 850-T; less cruiser and more what? Cafe racer / street tracker / spare "standard motorcycle" I guess. The massive Guzzi engine just calls for attention, so I want that to be the focus. In olden days some of this would be 'chopping', but now this makes everyone think stretched front ends and garish paint jobs. Call it what you will - making it restoration proof?

First job is to clean up the front end visually. Off come the gaiters and the black powdercoat on the sliders, and I'll also chop the fender - make the wheel itself stand out. Based off a tip (on the internets of course) I went looking for some Permatex gasket remover. Seems nobody is carrying the stuff anymore. While in the auto-parts store I couldn't pass up the "Blaster" - now that's the solution to all your needs - "As seen on TV!":
As an alternative I did find Mar-Hyde Tal-Strip II Aircraft Coating Remover. It looked serious and stuff so maybe that would work. Back home what do I spy on the Shelf of Chemical Death (tm)? Permatex Gasket Remover. Where did that come from? So I spray it on, wait a bit so it can do its magic (while I install new fork springs), and then try and wipe off the results. Not working quite as easy as the Internet might suggest. I use the rest of the can on a second dousing and go looking for something to scrape the chemically-melted coating off with. A while later I scrape off a bunch with a plastic paint scraper, but still lots of black coating left. The gasket remover is used up, so I switch to the "Tal-Strip II". 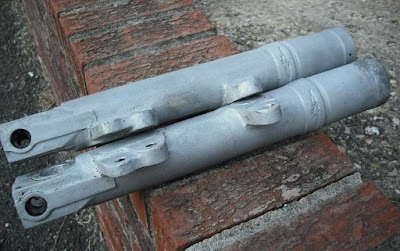 You don't need to read the 14 warnings to know this is some bad shit, just a whiff and you know this is serious business. This seems to work better, but still requires 3 or 4 passes. Finally after about 4 hours total and a pile of gloves (you don't want to get this stuff on your bare skin) it's pretty much done and ready for installation. Buffing and shining will wait for another day.
In addition to the new springs I also got a Tarozzi Fork Brace, which I admit was mainly gotten for the looks - even the box it came with looks cool: 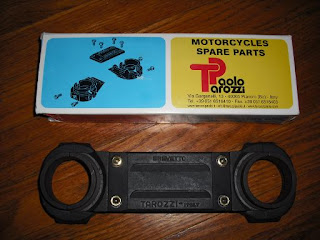 A quick attack of the front fender with a hack-saw (originality freaks will claim I could have gotten an aftermarket front and left the original alone, but considering good ones are available on eBay for $70, they're not hard to find - or desirable apparently, and cheaper), and then bolt it all together. Looks pretty good, although the fender needs to be chopped more, plus I'm not sure I like how the brake lines come forward like that. Not much to do about it though - maybe rotate the fender forwards a bit? 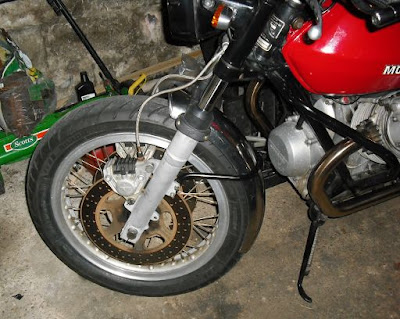