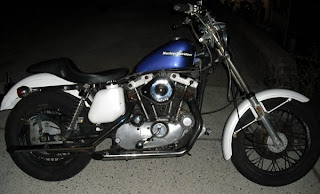 I've ventured to the dark side. I saw a craigslist ad for a '77 Sportster XLH (aka 'Ironhead') and decided to take a look. Looking turned to owning.

I'd been seeing lots of builds lately where people are doing old-school bobber, cafe and other stripped-down Harleys and was intrigued.

I've always been turned off by Harleys because so many people who have them are douche bags. No other way to put it. I can remember when I started riding in Chicago. There was this place around the corner called the North Side and it was "Yuppie Lawyer on Bike" central. It seemed like every time I rode by some tool who'd put a total 50 miles a year on their bike (can't tarnish the chrome, dude) would yell something derogatory out. Showing his pals how he was true blooded. This shit even happened when I had my Norton. Either that or you'd bump into some fat ass wearing as much Harley-themed clothing as possible, riding some huge land-yacht who'd refer to anything else as "some jap crap" - didn't matter if it was Asian, British or Italian. Then for the last few years all you saw were lollipop-bikes that were trying to emulate those being "built" on some Discovery Channel show by guys who seemed to order everything new from a catalog (when they weren't yelling at each other and throwing tools).

Lately though there's been a sea change. Lots of guys looking back into the 50s and 60s for inspiration and coming up with the stripped-down essentials. Several overseas builders have cropped up lately with killer bikes that are bobber + street tracker + cafe + whatever = simple and clean. Mix and match components - whatever works. Form follows function.
I especially liked the looks of the builds made from pre-Evo sportsters; Harley's answer to the light fast British bikes that were taking over on the late 50s and 60s. Not much there but a big lump of cast iron and aluminum, a seat, 2 wheels and handlebars. Basic. Elemental bike. Even better is that they're not very desirable because 1) they're old, 2) they shake, 3) tend to leak oil, 4) they're mostly from the dreaded AMF days. Perfect - I could get one for cheap and not worry that screwing it up would make me feel like I'd ruined something expensive.

So I kept my eye out, but most people wanted 3 to 5 grand. Seems sellers aren't aware that the bottom has fallen out and people aren't paying a premium for anything anymore, never mind 25+ year old motorcycles. Then I found the ad - it ran, needed some work, was close by and cheap. I went and took a look. Guys was pretty straight-forward: he'd bought it 2 years ago and got it running (new generator and some other bits). And then let it sit in the back yard since. ?!? Rust is not your friend.

Overly loud 2" slash-cut drag pipes, rusty 4" over forks, rims spray-painted black (probably to hide rusty spokes), old gas in the tank making me ill. Just what I was looking for.
Posted by pushrodmofo at 3:30 PM