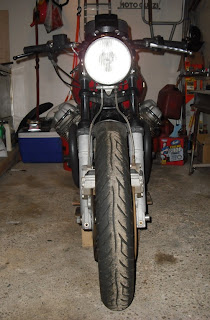 Now that the best time for bike maintenance is past, it's time for... taking the Guzzi's transmission off. Everyone is always going on about how winter is the best time to get things fixed, upgraded and generally spruced up in preparation for next season. I just can't do it. For one, it's cold in my garage. And two, I guess it's a form of seasonal affective disorder: I just get sad looking at bikes all cold sitting there waiting. So generally I just avoid the whole thing until it starts getting warm. Then the plans start to roll again.

Last year I had noticed two problems: 1) oil was leaking from the rear drive and 2) the revs would drop at idle if I held the clutch in (to the point sometimes that it would stall). Problem one is bad because oil might get on the tire and also things in the box need oil lest they wear prematurely. Problem two had me spooked because it's a sign of possible crank end-float, which would mean a complete engine tear-down. However it is also a sign of a bad layshaft bearing. I actually made a YouTube video and then posted it on the WildGuzzi forum to get the experts' opinion. Luckily consensus was that it was the layshaft bearing as the rev drop wasn't so bad.

From reading up on the replacement of the bearing, one can do it without taking apart the transmission - you just remove the driveshaft and it's accessible from the outside. However this bike is now 35 years old; it that bearing is bad, chances are other things are worn out. I'd like to make sure things are as they should. This runs into the problem of Guzzi transmission / drive box work needing special tools, and also best done by people who know what they're doing. So most likely I'll be sending them off to Charley Cole at Zydeco Racing.

He's been racing Guzzis for a long time on the vintage circuit. All he does are these two items, and he won't accept bikes - you send him the tranny and the rear drive and rebuilds them. The big attraction is he knows how to shim the transmission shafts properly for clean shifting. Most Guzzis apparently came from the factory not set up as good as they could be so they tend to 'clunk' into gear. Precise set-up of the internals cures that.
Posted by pushrodmofo at 11:10 PM 1 comment: